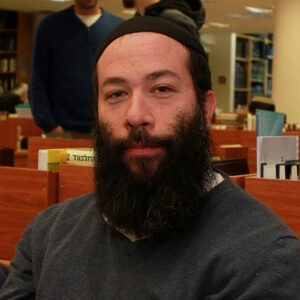 R’ Aharon serves as the Assistant Director of the Machon Meir English Department since 2005.

Originally from New York City, R’ Aharon made aliyah in 1997 at age 19 and settled in Gush Katif where He went on to study for 6 years at Yeshivat Torat Hachayim under the tutelage of Rabbi Shmuel Tal.

During that time, he and his wife pioneered the establishment of the town “Kerem Atzmona” in Gush Katif.

R’ Aharon is also a graduate of the Refuah Institute in Jerusalem where he studied Torah-Psychology and Counseling.

R’ Aharon now lives with his wife and six boys in the Galilee town of Yavniel and continues to exhibit self sacrifice by commuting two hours each way to Machon Meir several times a week.

R’ Aharon is also a matchmaker in his spare time.

You can find out more about his Shidduch activities on his website: https://israelshidduch.weebly.com